Kuhra Vital, a medical line allied with people who do not want to age.

After years of research, Khuravital Dermapharma Laboratories, specialized in anti-aging products, presents its set of facial line comformed by Phyell, cellular renewer,Kuracell, fresh phyto - organic cells, Vixel, eye and lip - contour gel, Khuran anti - acne gel,Dermagique , micro - peeling and repair treatment, Kycell, patch for the eyes and Maxica, dermo - tensor mask which are made from natural elements pure in concentration, non deluded, that will let you show a young face for ever.

Kuhra Vital, a Switzerland recommended line used by doctors and dermatologists with diverse and advanced active compounds, selected one by one for the skin treatment and repair, that has been specially formulated by real architects of the cutaneous reconstruction to stop the signs of age.

Kuhra Vital is a Swiss company located in Lucerne whose professional personnel and directors work in the area of aesthetic and dermatological medicine since the decade of the '80s. Kuhra Vital are created by the Dermabiol Institute and has been introduced in the market not as aesthetic-cosmetic products, but as medical-aesthetic products. Is in this last concept that its strength and exclusivity is based.

The Scientific research staff that form the Dermabiol Institute have made emphasis on the same concept and they have developed a line of products in which the healing and regenerative processes prevails over the merely aesthetic concept. The rejuvenation aspect of implant and body treatments whose investigations led to a war against ageing in all its expressions, has been highlighted. It is important to state that Kuhra Vital products has made of the image care and improvement, an essential issue.

The Dermabiol Institute participates in the design of the individual treatments. We count on consultants of great prestige like Drs. G. Dell'Osso and P. Petroforte (Italy); Drs. J. Odernell and G. Faborge (France) and the Dr. O. Kostelll (Germany). And with the constant collaboration of the most prestigious Universities of Europe.

The Scientific approach and projection in which Kuhra Vital bases the treatments with its products, is the following:

"It is not conceivable to try to approach the ageing when the damage is already irreversible." It is when the first signs and ageing symptoms begin to appear, so much facial as corporal, when the derma-functional alterations should be corrected to avoid the possible structural damages. Scientific efforts of the Dermabiol Institute and the Kuhra Vital products, a Swiss line of the new millennium, are directed towards this last objective. 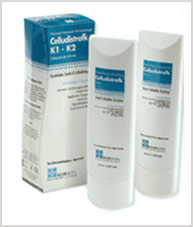